Today's Doodle celebrates the 150th birthday of Russian poet, novelist, and translator Ivan Bunin, who in 1933 became the first Russian to receive the Nobel Prize for Literature. Widely acclaimed for hisrare mastery of both prose and poetry, Bunin carried the tradition of classical Russian literature into the 20th century, establishing his legacy as one of the nation's most revered stylists of his time.

Ivan Alekseyevich Bunin was born on this day in 1870 in the western Russian city of Voronezh. He grew up with a passion for painting—an early creative expression he later credited as an influence on his writing style. Bunin began to publish poetry and stories as a teenager, leading to the 1891 release of his first book, “Stikhotvoreniya: 1887–1891” (“Poetry: 1887–1891”).

In 1901, Bunin won the prestigious Academy of Sciences' Pushkin Prize for his book of poetry titled “Listopad” (“Falling Leaves,” 1901). Around this time he began to turn his focus towards prose, establishing himself as one of Russia's most popular writers. Known for his understated and musical writing style, Bunin went on to craft vivid portraits of Russia through works like “Derévnya” (“The Village,” 1910), the autobiographical novel “Zhizn Arsenyeva” (“The Life of Arseniev,” 1930), his diaries “Okayánnye Dni” (“Cursed Days: A Diary of Revolution,” 1936), and the book of short stories “Tyomnye allei” (“Dark Avenues,” 1943).

An opponent of the Russian Revolution, Bunin left the country in 1920, ultimately settling in France, where he continued to publish novels and poetry for the rest of his life. 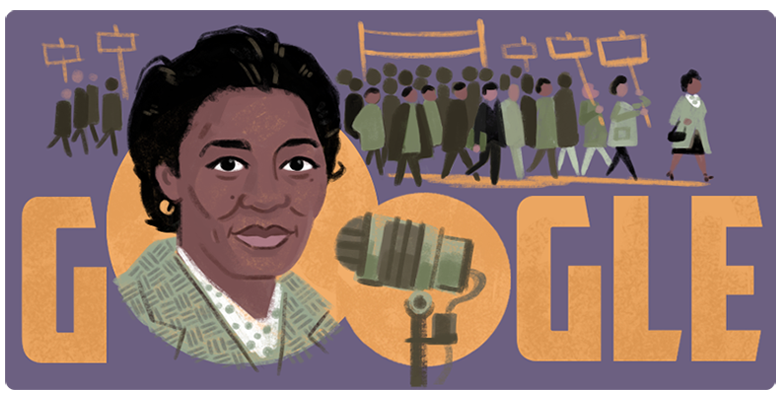 Today’s Doodle commemorates Trinidad-born activist, feminist, journalist, orator, and community organizer Claudia Jones. Among her groundbreaking accomplishments, Jones founded and served as the editor-in-chief for the West Indian Gazette and Afro-Asian Caribbean News—Britain’s first, major Black newspaper. Through its global news coverage, the Gazette aimed to unify the Black community in the worldwide battle against discrimination. The publication also provided a platform for Jones to organize Britain’s first Caribbean carnival in 1959, which is widely credited as the precursor to today’s annual celebration of Caribbean culture known as the Notting Hill Carnival. On this day in 2008, Jones was honored with a Great British Stamp in the “Women of Distinction” series to commemorate her lifetime of pioneering activism.

Claudia Jones was born Claudia Vera Cumberbatch on February 21, 1915 in Port of Spain, Trinidad and Tobago. At 8 years old, she moved with her family to New York City’s Harlem neighborhood. Passionate about writing, Jones contributed to and led a variety of communist publications as a young adult, and she spent much of her adulthood as an active member of the Communist Party USA.

Throughout her life, Jones tirelessly championed issues like civil rights, gender equality, and decolonization through journalism, community organization, and public speaking. She focused much of her work on the liberation of Black women everywhere from the discrimination they faced due to a combination of classism, racism, and sexism.

Jones’ political activity led to multiple imprisonments and ultimately her deportation to the U.K. in 1955, but she refused to be deterred. Beginning a new chapter of her life in Britain, she turned particular attention to the issues facing London’s West Indian immigrant community. In an effort to counteract racial tensions, she inaugurated an annual Caribbean carnival, whose spirit lives on today as a symbol of community and inclusion.

Thank you, Claudia Jones, for your lifelong commitment to a more equitable world.

Today’s Doodle, illustrated by Istanbul-based guest artist Enes Diriğ, celebrates the 86th birthday of Turkish author, playwright, engineer, and professor Oğuz Atay. His 1972 novel “Tutunamayanlar” (“The Disconnected”) is widely acclaimed as one of the most significant Turkish novels of the 20th century. With his reliance on shifting narrative perspectives and blend of dreams and reality, Atay was among the first Turkish writers to explore the postmodern style known as metafiction.

Oğuz Atay was born on this day in 1934, in İnebolu, a coastal town on the Black Sea in the Kastamonu Province of Turkey. Raised in a well-connected family, he received a top education and went on to pursue a career in the field of civil engineering. In 1960, Atay became a lecturer at the Istanbul State Engineering and Architecture Academy, but it was the fiction he wrote in his downtime that came to define his legacy.

Atay entered the limelight of Turkish literature with the publication of “Tutunamayanlar” in 1972, a towering literary achievement which he followed up with a rapid string of novels through the ‘70s. All the while, he continued his teaching career and in 1975 was made an associate professor.

Atay’s “Tutunamayanlar” was identified by UNESCO in 2002 as an important literary work in need of an English translation. It has since been translated into English, Dutch, and German, opening Atay’s seminal novel to non-Turkish readers around the world.

Today’s Doodle, illustrated by Alberta, Canada-based guest artist Michelle Theodore, celebrates the 197th birthday of American-Canadian newspaper editor and publisher, journalist, teacher, lawyer, abolitionist, and suffragist Mary Ann Shadd Cary. Credited as the first Black female newspaper editor and publisher in North America and the second Black woman to earn a law degree in the United States, Shadd Cary is renowned as a courageous pioneer in the fight for abolition and women’s suffrage.

Mary Ann Shadd was born on this day in 1823 in Wilmington, Delaware. Her parents were dedicated abolitionists and used their home as a station on the Underground Railroad to provide a safe haven to escaped slaves. Following her graduation from a Pennsylvania boarding school, she became a teacher. Frederick Douglass published her first work in his newspaper in 1848, which was a bold call to action for the abolitionist movement.

In the wake of the Fugitive Slave Act of 1850—a major threat to Black people in the U.S.— the Shadd family moved north to Canada. It was there in 1853 that Shadd launched her historic newspaper, The Provincial Freemen, a weekly Black publication geared especially toward escaped slaves. Following her marriage, Shadd Cary moved back to the U.S. and, in 1883 earned her trailblazing law degree from Howard University.

For her invaluable contributions to Canadian history, Shadd Cary was honored by the country in 1994 as a Person of National Historic Significance.

Today’s Doodle celebrates Uganda’s Independence Day in commemoration of the date in 1962 when the East African country shed its status as a British protectorate to become a fully autonomous nation.

Depicted in the Doodle artwork is Uganda’s flag, which features six alternating stripes of black, yellow, and red— colors that represent the Ugandan people, equatorial sunlight, and solidarity. The distinctive bird at the center of the flag is the Grey Crowned Crane, a gentle creature selected for its natural beauty and elegance to represent Uganda as its national emblem. The bird’s raised leg creates a deliberate pose meant to symbolize the country’s movement into the future.

The Hangul alphabet was first unveiled in 1446 by the Choson dynasty’s King Sejong. More than 500 years later, it is still considered a remarkable achievement, even by modern linguistic standards. The 24-letter alphabet remains the only writing system in the world that separates sentences into words, syllables, individual sounds, and elements of articulation like exhalation or voicing. Despite its sophisticated representation of complex spoken language, the writing system is noted for its elegance and simplicity; in fact, it’s said that a dedicated beginner could learn Hangul in just a few hours!

Today’s Doodle, illustrated by Berlin-based guest artist Christoph Niemann, commemorates German Unity Day or Tag der Deutschen Einheit on the 30th anniversary of the country's reunification. Following the fall of the Berlin Wall in late 1989, government officials from East and West Germany signed an agreement on August 31, 1990, that consolidated the two countries into one nation. Known as the Unification Treaty, the historic resolution went into effect just over a month later on October 3rd, a date now celebrated each year as a national holiday across Germany.

To honor the start of the UK’s Black History Month, today’s Doodle, illustrated by UK-based guest artist Kingsley Nebechi, celebrates British writer, composer, business owner, and abolitionist Ignatius Sancho. A former slave who advocated for abolition through prolific letter-writing, Sancho became the first person of African descent to cast a vote in a British general election.
Born in Africa around 1729, Ignatius Sancho was enslaved for the first five years of his life on the Caribbean island of Grenada before he was taken to England as a toddler. There, he was forced to serve as a slave for three sisters in Greenwich but eventually managed to run away and escape. He then gained employment with another aristocratic family for whom he worked for the next two decades. Having taught himself to read and write, Sancho utilized his employers' extensive library to further his self-education.
A skilled writer, Sancho penned a large volume of letters, many of which contained criticism of 18th-century politics and society. Newspapers published his eloquent calls for the abolition of slavery, which provided many readers their first exposure to writing by a Black person. The multi-talented Sancho also published four collections of music compositions and opened a grocery store with his wife in Westminster. As a financially independent male homeowner, he was qualified to vote—a right he historically exercised in 1774.
Sancho’s extensive collection of letters was published posthumously in 1782, garnering huge readership and widespread attention to the abolitionist cause.
Thank you, Ignatius Sancho, for your courageous fight in the name of freedom and equality.